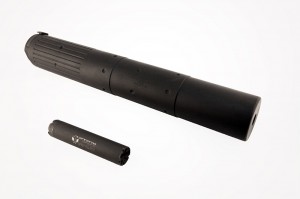 Many people are confused when purchasing a suppressor because they assume a suppressor's caliber has to match the weapon's caliber. In reality, you don't necessarily care about caliber with suppressors.  What you care about is bore size and pressure - which is why they are categorized using bore size instead of caliber.  The rule of thumb is: if the suppressor's bore is big enough for the bullet you want to shoot and it can handle the pressure, then it should work with your weapon.  (I say 'should' because there are some combinations that won't work - for example using a rifle suppressor on a pistol typically won't cycle; and you definitely want a take-apart suppressor if you're going to be using unjacketed rimfire ammunition.) After thinking through the implications, it becomes obvious that you can purchase a single suppressor to run on multiple weapon calibers & platforms - which brings a lot of versatility to the table. Unfortunately, nothing in life is free and there are some trade-offs with the one-suppressor-fits-all strategy.  The main thing you're giving up is efficiency. Before going any further, let me explain what I mean when I talk about versatility & efficiency: In most cases, 7.62mm suppressors are bigger than their 5.56mm cousins; but, not by enough to provide the same level of suppression.  Because of this, a 7.62mm suppressor will typically be bigger, heavier, and louder than a 5.56mm suppressor on the same weapon. Another thing we've found in testing is that first-round-pop tends to be significantly higher when using a suppressor with sub-calibers (i.e. 5.56mm caliber through a 7.62mm suppressor, or 9mm through a .45 suppressor). What you'll find is that many people argue for both approaches; but, I believe they're both right. For some people, the allure of having one suppressor for multiple weapons is a definite advantage - and it's hard to argue with that logic.  On the other hand, it's also hard to argue with wanting a suppressor that is smaller, lighter & quieter.  In reality, both answers are right, so you just have to decide what works for you. At the end of the day, if you do decide to start down the one-suppressor-for-multiple-firearms path, I would highly recommend picking something up that fits at least one firearm well.  You can always pick up another suppressor in the future to cover the smaller caliber firearm(s) more effectively; but, you don't want to be stuck with a suppressor that isn't really what you would have preferred on the larger caliber firearm... As always, feel free to contact us if you have any questions at all when picking a suppressor.  We spend time shooting and metering almost all of the products we sell, so we can help you know what will be the best fit for your situation.
0 Comment(s)
My Wish List
Last Added Items
Go to Wish List
You have no items in your wish list.
Categories
Recent Posts