Understanding the benefits of quick-attach suppressors

Understanding the benefits of quick-attach suppressors 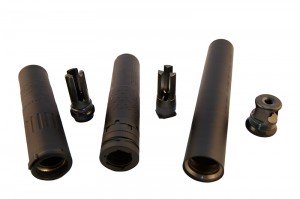 From left to right: AAC M4-2000, Silencerco Saker, Thunder Beast 30BA. All these mounting system have their own pros and cons.[/caption] Quick-Attach rifle suppressors are some of the most popular models on the market because of their versatility. Even though they are extremely popular, I hear people all the time who claim there aren't any advantages to choosing a quick-attach.  These people often have a vested interest in steering people toward direct-thread models, and they often make valid points; but, I do believe there are real advantages offered by quick-attach systems. Unfortunately, the terms 'Quick-Attach' and 'Quick-Detach' (QD) can be a bit misleading. I talk to people all the time who assume a direct-thread model cannot be removed at all - which couldn't be further from the truth.  In fact, a direct-thread suppressor can typically be attached and removed just as easily as quick-attach models (although it does require a few more turns to thread it on or off).

If the quick attachment and removal aren't the main benefits of a quick-attach, what is?

What are the downsides to a quick-attach suppressor?

The main downside is a slight loss in accuracy.  Where a direct-thread suppressor will often increase your weapon's accuracy, a quick-attach suppressor can have the opposite effect. Keep in mind that we're not talking about a huge loss of accuracy; but, if you're a long distance shooter, every little bit counts. There are, of course, several factors that will impact accuracy: As a general rule, mounting systems that don't use a lock (like the Thunder Beast 30BA or the Wilson Combat Whisper) will deliver the same accuracy as a direct-thread suppressor.  After that, a compression mount system (like the Silencerco Saker or Surefire SOCOM suppressors) will also deliver excellent accuracy - and you still get the locking mechanism. Remember that most modern quick-attach suppressors provide good accuracy for most shooters & hunters; but, if you're looking to squeeze out every last bit - then a non-locking or compression mount is the way to go.

Is a quick attach suppressor more durable than a direct thread model?

Although there isn't anything in a quick-attach suppressor that makes it inherently more durable; you will find that most of these models will hold out better with either short barrel rifles (SBRs) or full auto weapons. The primary reason for this boils down to market demands and the design goals of the manufacturers. For example, most long-range precision shooters prefer a direct-thread suppressor - which is why most of the Titanium suppressors are direct-thread. High & medium volume shooters, on the other hand, tend to demand extreme durability - so tougher materials like Hoplon & Inconel make more sense. For even more protection of your quick-attach suppressor, you can opt to use a muzzle brake attachment - which will function as an additional blast baffle inside the suppressor. Although this doesn't make much difference on longer barrel lengths, it can make a very big difference if you're using a short barrel rifle.

Some of the new compression mount systems - like those used by the Silencerco Saker or Surefire SOCOM suppressors are blurring the lines between quick-attach and direct-thread models when it comes to accuracy; which, I suspect will make the quick-attach models more appealing to even more people in the future. At the end of the day, each shooter needs to decide what they really want in their suppressor.  If, like many rifle suppressor owners, you decide a quick-attach is the way to go, then take a little time to analyze how you plan to use it so you can be sure to get a mounting system that will fit your needs in the future. You can also feel free to contact us if you want to spend some time chatting about what would work best for your particular setup.  Since we stock and shoot so many different suppressors, we are able to help you pick the perfect suppressor without trying to push the one model that happens to be sitting on the shelf that day. :)
0 Comment(s)
My Wish List
Last Added Items
Go to Wish List
You have no items in your wish list.
Categories
Recent Posts