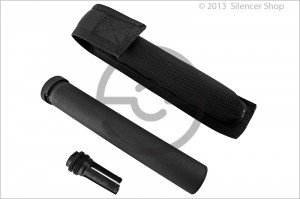 Over the last month, we've spent some time shooting the 7.62mm SWR Specwar suppressor using both .300 BLK and 5.56mm - and the results have been impressive! Before going into too much detail, I should mention that our expectations started out high for this suppressor because we were already big fans of the SWR Specwar 5.56 - which is very possibly the best value 5.56mm suppressor on the market. Even with those high expectations, the Specwar 7.62 absolutely blew us away with its .300 BLK performance!  Granted, this is a fairly large suppressor; but, we hadn't seen numbers like this in a quick-attach suppressor before the Specwar tests. At this point, here is how I would rate the Specwar 7.62:

The Specwar uses a good mounting system that locks up comparably to most other tooth-mount systems on the market.  It also fits great on the 5.56mm mounts for those of you who want the additional versatility of a larger bore suppressor. The flash hider is a 3-prong design - and it uses Silencerco's Trifecta system, so there isn't any ping. At this point, there are both muzzle brakes and flash hiders available - and the Specwar comes with one included mount, which makes it an even better value.

The Specwar 7.62 is definitely toward the heavier end of the current 7.62mm quick-attach suppressors @ 24 oz.  This makes it just a hair lighter than the new YHM Phantom 7.62 M2 - so we'll do some video comparisons of those two suppressors in the near future.

The Specwar 7.62 is also toward the larger end of the spectrum when compared to other 7.62mm quick-attach suppressors.  It's almost 1.5" longer than the AAC 762-SDN-6, which is big part of the Specwar's excellent performance. The additional size allows the SWR Specwar 7.62 to perform exceptionally well on 5.56mm weapons - simply because it's able to overcome the lower efficiency of the larger bore with additional volume.

The SWR Specwar is a stainless suppressor with an Inconel blast baffle.  Although it doesn't have a full Inconel or Hoplon baffle stack like some of the higher end suppressors, this is still a very solid build that will hold up just fine to either short barrel or full-auto 5.56mm usage.

Just like its little brother, the Specwar 5.56, the argument could be made that this is one of the best values in the 7.62mm suppressor market.  We'll have to do some testing of the new YHM Phantom 7.62 M2 before we can call a clear winner; but, we're rooting for the Specwar. :)

The Specwar isn't intended to compete head to head with the higher end models, like the AAC 762-SDN-6 or Surefire SOCOM.  Instead, it's targeted at the YHM suppressors, as well as the market space that AAC previously occupied with the now-discontinued 762-SD.

We still have more performance testing to do; but, so far, the Specwar is performing extremely well.  In fact, as I previously mentioned, the Specwar is now our .300 BLK subsonic champ! Here are some numbers from our metering:

Overall, the SWR Specwar 7.62mm suppressor is a great choice if you're looking for a great value on a do-it-all suppressor.  It is a bit large & heavy; but, the performance just can't be beat at this price range.  The Specwar will also handle just about anything you would want to throw at it - all the way up to .300 WM. Stay tuned for additional results over the next few weeks as we put the Specwar 7.62 through some additional testing - and compare it head to head with some of its competitors. :)
0 Comment(s)
My Wish List
Last Added Items
Go to Wish List
You have no items in your wish list.
Categories
Recent Posts