How-To , Shooting
I got a chance to take those initial 9mm rounds out to the range and I have to admit that it was a lot of fun!  I only had 50 rounds; but, it was one of those times where I left with a smile on my face. The initial testing was done with a 5" M&P and an XD(m) 3.8 with a Storm Lake threaded barrel.  An AAC Ti-RANT 9 suppressor was also used with a sound level meter to get some suppressed results. Having said all that, here are the results:

On the M&P 9, this load was easily in the subsonic range - yet it is still above the threshold for making Minor at IDPA & IPSC matches.  As usual I was amazed at just how loud an unsuppressed weapon really is - even when shooting subsonic ammo. After the sound level meter & chronograph, I only had 10 rounds left to test for accuracy in this pistol - and it just wasn't enough to get a good idea of how this load will do.  I fired a single 10-round group from an unsupported, standing position @ 15 yards. Unfortunately, the grouping wasn't that great; but, I just didn't have enough ammo to see if it was the load, or the fact that I hadn't warmed up yet... [caption id="attachment_632" align="aligncenter" width="247" caption="10 round group fired from an M&P with a 5" barrel."] 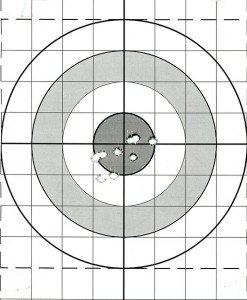 Once again, this load was easily in the subsonic range - even when shooting with the Ti-RANT, which added 31 fps to the average velocity.  With this pistol, we are actually a bit below the Minor threshold for IDPA & IPSC with the slower rounds. As always, the Ti-RANT was just amazing - bringing the overall sound measurements down into the mid-120's! As with the M&P, I only had 10 rounds left for accuracy testing; and, although the XD(m) did better than the M&P, I'm still hoping for better accuracy results in the future. [caption id="attachment_633" align="aligncenter" width="247" caption="10 round group fired from an XD(m) 3.8 with a threaded barrel"] 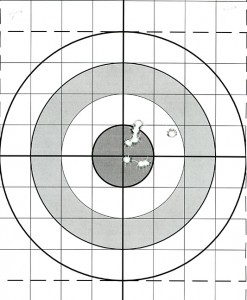 [/caption] Overall, I had a lot of fun with this load. Now I'm going into mass-production mode and I'll start running it through it's paces in the next few weeks. My one unresolved issue is the accuracy - since I really would like to get the same accuracy I see with my 124gr loads. I'll post if that ends up being a problem once I can get more than one 10-round group from each pistol.
0 Comment(s)
My Wish List
Last Added Items
Go to Wish List
You have no items in your wish list.
Categories
Recent Posts