What is a Silencer vs a Suppressor?

What is a Silencer vs a Suppressor? 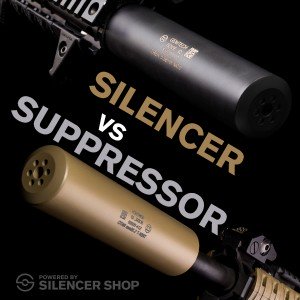 There's a lot of confusion & misinformation focused around the differences between a silencer and a suppressor.  In fact, it's historically been one of our top questions from customers. The simple answer is both words can be used interchangeably - meaning the terms Silencer and Suppressor refer to the exact same thing. When Hiram Percy Maxim invented the suppressor, he referred to it as the 'Maxim Silencer' in his patent and marketing materials.

The Maxim Silencer was a big hit because of all the advantages it offered.  As a result, the word Silencer caught on quickly - and is now used as the legal definition in both state and federal regulations, as well as on all ATF forms. In reality, no 'silencer' is truly silent - so many purists prefer to use the word Suppressor, which is more technically correct since these devices are capable of reducing/suppressing the sound from a firearm and not truly silencing it. Trust us when we say there isn't a magic firearm silencer that's only available to the military.  Civilian and Military technology is exactly the same - aside from the fact that the military tends to focus requirements on low blowback and long-term reliability & the civilian market is more focused on quietness, versatility & accuracy. Unfortunately, although both terms can be used interchangeably, many people insist that only one or the other is correct - and it can be a source of contention similar to the never-ending 9mm vs .45 argument. If you want a difference between the terms, think of it like this: