Can You Suppress Supersonic Ammo?

Can You Suppress Supersonic Ammo?

Shooting , Silencer Answers
When people first start learning about suppressors, one of the first 'facts' they learn is typically that you can't suppress supersonic ammunition. This couldn't be further from the truth!

What is the Supersonic Crack?

After a bullet is fired, it creates pressure waves as air is displaced along its path.  Essentially, the air has to move out of the way so rapidly that it's forced to be temporarily compressed. 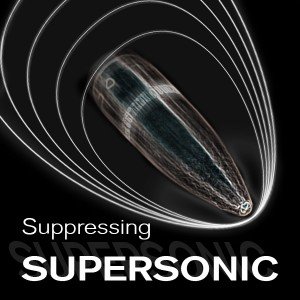 While this pressure wave is created at any speed, it becomes noticeable as a 'crack' once the bullet surpasses the speed of sound (which is approximately 1125 feet per second).  At that speed, the pressure waves can't get out of the way fast enough - and they merge together as a 'crack' that travels away from the bullet at the speed of sound. Unlike the report of the firearm, which has a very specific origination point, the supersonic crack actually originates along the entire path of the bullet - as long as it's traveling faster than the speed of sound. Because the supersonic crack is traveling with the bullet, it can't be localized the same way a typical gun shot can.  Many hog hunters will point out that; although the hogs can definitely hear the crack, they don't know where to run when using a suppressor.

How loud is the Supersonic Crack?

There are lots of factors that impact how loud the supersonic crack is; but, in most of our testing we've found it isn't very loud compared to the report of the firearm. When shooting a suppressed .22, for example, the difference between subsonic and supersonic ammunition is typically only a couple of decibels.  There's actually a bigger difference when going from a low-end to a high-end model.  (We did this testing with a .22 because it's easy to get ammo that runs just under or over the speed of sound - so we could eliminate other variables.) Having said that, the decibel level doesn't tell the whole story for a couple of reasons: In other words, even though it isn't that loud in the grand scheme of things, the supersonic crack can make a real difference to how much you enjoy shooting.

Why is it a Bad Idea to Always Shoot Subsonic Ammo?

While it's true that shooting subsonic ammunition is going to be quieter, it isn't always a good idea for a variety of reasons:

Can Supersonic Ammunition be Suppressed?

Absolutely, yes!  Some of the most enjoyable rounds to shoot suppressed are supersonic. In those cases, the supersonic crack is still far below the 'comfort threshold' - so it's possible to enjoy hunting or shooting without hearing protection. For example, shooting a full-power .270 or .308 is completely comfortable for most people when using a bolt action rifle.  It's amazing how quiet a good suppressor really is!  Even high-power rounds like .338 Lapua become extremely comfortable to shoot with a good suppressor. On top of that, you'll see reduced recoil, better accuracy, and increased velocity/range when using a suppressor - so there isn't much downside. On the other hand, there are some weapons that ride the line of what's comfortable - like a 9mm pistol.  In those cases, a supersonic round is still hearing safe for home defense scenarios - but it's just a little to loud to be comfortable for most people at the range.  Subsonic 9mm ammo, on the other hand, sounds significantly better because that sharp crack is eliminated. Another thing I, personally, recommend is to try a suppressed .22 with supersonic ammunition.  It's completely comfortable; and, in the right conditions the echo of the supersonic crack will make it sound like you're being shot at since you won't hear the report of the gun you're firing.  I've seen multiple people put the rifle down, thinking something was broken - and it's actually kind of funny.

At the end of the day, using  a suppressor will benefit pretty much any firearm. When you get your first silencer, don't feel like you can only shoot with subsonic ammo (unless the model is only rated for that).  Be sure to at least try it with supersonic ammunition, and I suspect you'll be impressed with the results!
0 Comment(s)
My Wish List
Last Added Items
Go to Wish List
You have no items in your wish list.
Categories
Recent Posts