So many people truly believe that suppressors were designated for military personnel, the mafia, and James Bond. Even I did a couple of years ago.  It’s a pretty common misnomer that silencers are illegal, and we are constantly told by customers that they didn’t even know that they could buy a silencer until they ran across our website. Perhaps we are jaded by being a part of this process on a daily basis, but it is amazing how many people just don’t know! 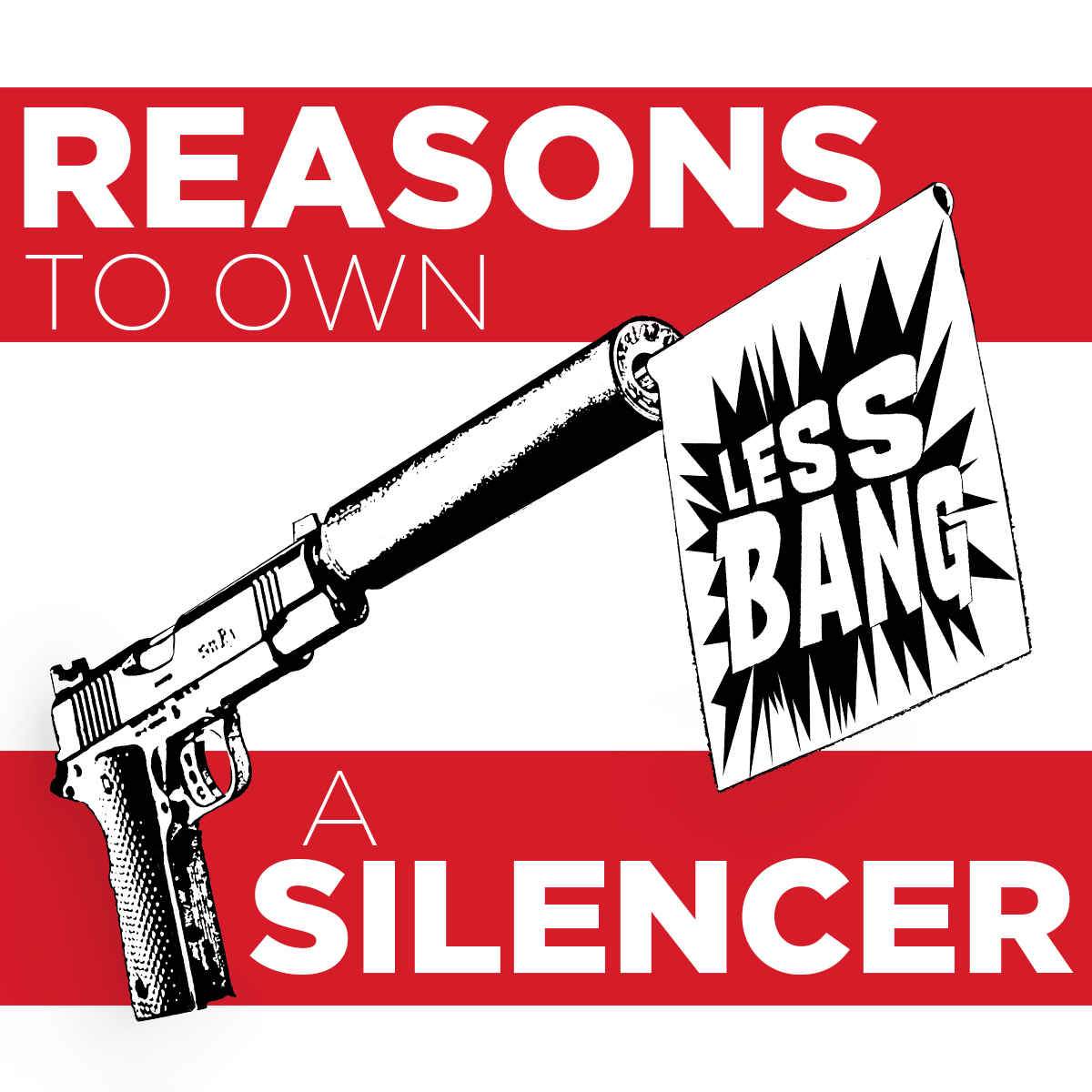 Some speculate that the imposition of the NFA Tax was the catalyst to this myth because $200 tax stamps in the 1930’s made silencers virtually unobtainable due to their expense, making it unaffordable for the general population to obtain. So it’s simple to see how the easy jump from “out of my budget” to “illegal” might happen over the years. Because of social media, word of mouth, and the fact that $200 today is more affordable than $200 back in the 30’s, it seems as though more and more people are being educated on their rights to acquire a suppressor.

The more I’m around people who have an incredible depth of knowledge in this industry, the more I realize exactly how beneficial and useful silencers can be. Each time I’m out at the range or discussing silencers with someone, it brings to light yet another benefit of shooting suppressed.

After many conversations with varying degrees of expertise, I’ve listed a few reasons why people like shooting with a silencer below.

Reduced sound levels is by far the most popular answer. I know, I know, it sounds insane that something called a “suppressor” or “silencer” is the number one reason why people would want them.

But I’ve worn foamies before at the range, or forgotten to bring some ear protection when out hunting, and have experienced that ringing sound long after I’ve left my adventure. Call me crazy, but I’m almost 100% certain that I’m not the only one who has gone to the range or out hunting and experienced some discomfort from not having the right or enough hearing protection on.

A simple suppressor added on to your host firearm is more often than not better than a good set of hearing protection. So it’s an easy step towards preventing any long term and additional damage to your hearing.

Another reason a lot of people prefer shooting suppressed is because of the recoil reduction.

Have you ever been slugged in the arm by a friend and even though it’s funny, it’s either obnoxious, uncomfortable, or even a little painful? Has shooting unsuppressed ever made you feel that way? A lot of people, especially when they first start out shooting, shoulder a firearm or grip a pistol incorrectly to the point that you’re sitting there wondering if firearms can do gymnastics due to the muzzle flip that you just witnessed.

Throwing a silencer on your firearm helps mitigate some of the recoil, thereby making your suppressed friend a little bit weaker than the original punch it used to pack.

Blinded by the Light

I understand wanting cool pictures to post on social media. Some of those muzzle blast pictures out there are pretty sweet. But if you’re shooting, especially in low or little to no light, that flash can be nothing short of blinding. To top it off, if you’re shooting with a night vision optic on the firearm, the muzzle flash can white out the optic either permanently or temporarily depending on the quality optic you’re running. You can always take off the can to get a good muzzle blast picture for the ‘gram whenever your heart desires as well.

Follow-up shots require you to line up your sights/optic after the firearm has recoiled. However, due to the reduced recoil of shooting suppressed, you’re able to more quickly realign your sights to create faster follow-up shots.

Less Bang for Your Buck (in a good way)

Whether shooting at a target or out in the field hunting, the name of the game is accuracy and precision. While we can’t help precision per say (that takes practice), but shooting suppressed helps with accuracy.

The grouping generally tends to shrink because the gun is affecting the shooter less. This reason is a little more speculative as to why it happens, but it could be argued that the increase in accuracy occurs because the gun is more tame. Most people tend to shoot a .22 better than a .338 lapua, so if you can make a .338 feel more like a 5.56, your anticipation of the sound and recoil will be less, therefore making the shot less affected by the human knee-jerk reaction that tends to happen.

This is probably the most important reason on this list (I’m kidding, but it is oddly important to some). As Tyler (one of our expert silencer nerds here at Silencer Shop) says: “When you look good, you shoot good.”

Here’s the thing: a lot of people trick out their trucks because they want to. Do you need a custom lift kit with 33’s? Of course you do! The same thing happens when you trick out your firearm. There’s something to be said about the correlation between looking good and effectively having more confidence because of it.

Additionally, owning a suppressor always sparks conversation at the shooting range. So you might just meet your future best friend because of it.

Conventionally speaking, this title might not make sense, but it truly does affect your environment less, therefore making silencer ownership arguably unconventionally environmentally friendly. Whether you’re at the range or hunting, if you’re doing either activity suppressed, it’ll have noticeably less impact on those people or animals around you.

Safe and Fun for Everyone

A more manageable gun is a more fun and safe gun. We’ve all seen those people who made it onto YouTube for attempting to shoot a firearm where the caliber was too much for them and they end up letting go of the firearm or, worse, getting injured from it.

Whether they were made social media famous or not, some people are fearful of firearms. Being able to responsibly introduce family, friends, or even children into the firearm world utilizing the reduction of sound and recoil can help foster a more positive association with firearms. And instead of the person using their senses to help alleviate adverse reactions to a round being fired, they are able to focus on safety protocols without being distracted.

There are more arguments to be made for owning a suppressor, I’m sure. If you’ve got more ideas or additions, comment below!

All in all, everyone has their unique reasons for owning their own suppressors, and it’s probably a combination of a few or all of them above. What I’ve found is that once someone purchases a silencer, they tend to buy more because they enjoy shooting suppressed that much more. And I feel like repeat buyers are a true testament for how much of a game changer suppressing a firearm can be, no matter what their reason(s) for obtaining their own.

If you’ve got any questions, we’ve got a lot of information on how to buy a silencer or you can contact us and let us know how we can help.

1 Comment(s)
elwin emery jr
Did'nt know this. Does one come under more scrutiny, for even wanting to own one?
Reply Oct 07, 2021 15:32
Becky
Hi Elwin! Glad you asked! It is completely within your rights to apply for and buy a silencer. After all, a silencer is just a firearm (and simple hearing protection)! Just make sure to check your state and local laws for any limitations here (https://www.silencershop.com/blog/post/suppressor-laws-by-state). Once you know you are in the clear, reach out to us to go over some great options with you!
Reply Oct 07, 2021 15:47
My Wish List
Last Added Items
Go to Wish List
You have no items in your wish list.
Categories
Recent Posts