What is POI Shift?

What is POI Shift?

Opinion , Shooting
We get a lot of calls from people who are concerned with POI, or Point of Impact, shift when using a suppressor.  Unfortunately, a lot of people aren't 100% sure what that is, even though it's a very simple concept. At a high level, POI shift is simply the shift of the bullet when a suppressor is installed.  It's typically measured in MOA (Minute of Angle) - so a POI shift of 2 MOA would indicate a 2" shift at 100 yards, 4" at 200 yards, etc... With suppressors, there are really 2 types of POI shift to be concerned with:

1. POI Shift When Mounting the Suppressor

When you put a suppressor on, or take it off, you'll typically see some POI shift.  We've run quite a few tests on this and have found that the initial POI shift tends to be more impacted by the threads on the weapon rather than the suppressor; so, if you run 10 different suppressors on the same gun, they will generally all shift in the same general direction. There are a couple of cases where you'll see no POI shift at all: The initial POI shift will be repeatable with most suppressors; so, it should shift to the exact same place every time you put the suppressor on or take it off. 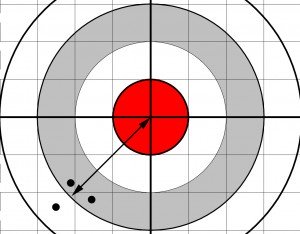 It's not uncommon at all to see a shift of 2 MOA (i.e. 2" at 100 yards) - but still see an improvement in accuracy (your group sizes shrink).  In this case, simply re-zero your optics and call it good. :) If you see larger POI shifts of 8 MOA or more (i.e. 8" at 100 yards), that's the time to take care to avoid possible issues.  The best thing to do is to have a gunsmith check the threads on your weapon to be sure they're concentric (which means the threads are fully aligned with the direction your bore is pointing). You'll hear a lot about suppressors that claim to have no POI shift - but that's typically only possible if the silencer's bore size is made larger than necessary.  The problem with that is a larger bore will result in a less efficient suppressor - so you're often trading the slight POI shift for decreased suppression. Remember that a POI shift is NOT the same as a decrease in accuracy; and, it's often possible to see a POI shift and an increase in accuracy at the same time.

2. POI Shift from Shot to Shot

The second type of POI shift is a shift that occurs from shot to shot - and this is generally more related to the mounting system of a quick attach suppressor. 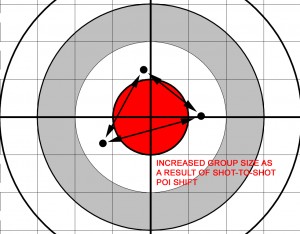 Although mounting systems have improved a lot over the last few years; and, it's often possible to see the same accuracy from direct thread and quick attach suppressors, many locking quick attach designs will result in a loss of accuracy. That loss of accuracy is a result of the slight movement of the suppressor as it shifts on the mount from shot to shot. Because of this loss of accuracy on some quick-attach mounts, many accuracy shooters will only use direct thread suppressors because they don't have any shot-to-shot wobble.  Some of the new compression mounts and small tooth mount systems are also starting to venture into the accuracy realm that was previously dominated by direct thread suppressors. Most modern quick-attach systems are capable of at least 1.5 MOA accuracy (i.e. 1.5" at 100 yards).  Most people are shooting larger groups than that anyway - and typically won't see much, if any, change in accuracy.  If, on the other hand, you're shooting 1/2" groups at 100 yards, you'll probably be disappointed if you're groups open up to 1.5 MOA. :)

At the end of the day, the initial POI shift isn't a very big deal in most cases.  As we already mentioned, just put on the suppressor and re-zero you're weapon. For volume shooters, any modern locking system will be sufficient; but, if you're a precision shooter, we'd recommend sticking with either a direct thread model or a locking quick attach that uses a compression mount or a tooth mount with smaller teeth.
0 Comment(s)
My Wish List
Last Added Items
Go to Wish List
You have no items in your wish list.
Categories
Recent Posts