Opinion , Shooting
Well, we finally got setup with a .300 BLK demo rifle and took it out this weekend to mess around with it.  I have to admit that this is a very fun round to suppress! To start out, we are just using the recommended load from AAC: We ran this load over the chrono and ended up with an average velocity of 990 fps out of an 8" barrel. I will say that this particular round looks a bit funny with such a giant 220gr bullet sticking out of that little 5.56mm case :).  It also makes me just a bit nervous to have both the .300 BLK and a 5.56mm rifle on the table at the same time - since I'm sure no good would come from someone sticking a 5.56mm magazine into that .300 BLK rifle... 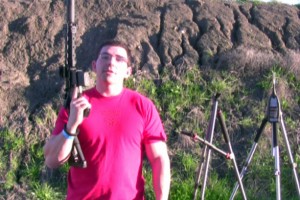 Regardless, when it comes to shooting suppressed - the .300 BLK was an absolute blast!  This is definitely on my short list of "most fun rounds to suppress". We did some quick-and-dirty metering just to give us an idea of how it would suppress using the AAC 762-SDN-6 suppressor.  Once again, we were using an 8" SBR for this metering - and the metering was done 1 meter from the muzzle (although we were not as exact as normal since we were just looking for ballpark numbers). The average 10-round results were: The average reduction using the 762-SDN-6 suppressor was just over 33 dB.  Not too shabby! Over the next few weeks & months, we'll do a lot more testing with this round - and we'll get setup with some longer barrel lengths as well.  The initial reaction was very positive from everyone present, but we need to do a lot more testing to see how the different 7.62mm suppressors compare with this round.  There are several pistol caliber suppressors that should work well with the .300 BLK as well. If you're interested in the .300 BLK, then be sure to check back for more information as well as videos that we'll be posting to our YouTube channel. This is one round that I'm excited about messing around with!
0 Comment(s)
My Wish List
Last Added Items
Go to Wish List
You have no items in your wish list.
Categories
Recent Posts