Silencer Reviews
Well, we've spent a couple of days crunching numbers and the results are finally in!  In case you haven't read about our testing, we ran 9 suppressors through 2 guns with 2 types of ammunition - which resulted in a lot of data. Before going into the sound reduction numbers, which I know is what you care about, I will make a quick statement about velocity changes.  Personally, I expected the velocity numbers to increase across the board - but it didn't work out that way at all.  In fact, when using the Federal ammunition, velocities stayed fairly constant.  With the Remington subsonic ammunition, on the other hand, the velocities increased by about 20 fps when shot from both the Ruger 10/22 as well as the Walther P22.  In some cases, the Remington ammunition came very close to being supersonic out of the suppressed Ruger 10/22... My guess on the subsonic velocity increase is that the Remington ammunition is using a slow burning powder that continues to propel the round through the suppressor.  If that's true, it will probably also result in a fairly significant muzzle blast when shot at night - so we're going to head out and look at that when we get a chance. Having said that, let's go on to the important data!  We'll start out with the Remington 10/22 data - even though the Walther P22 results were a little more interesting. 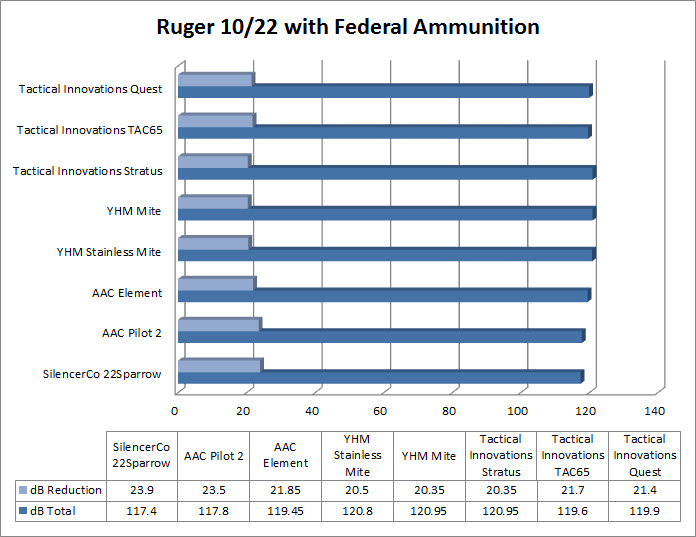 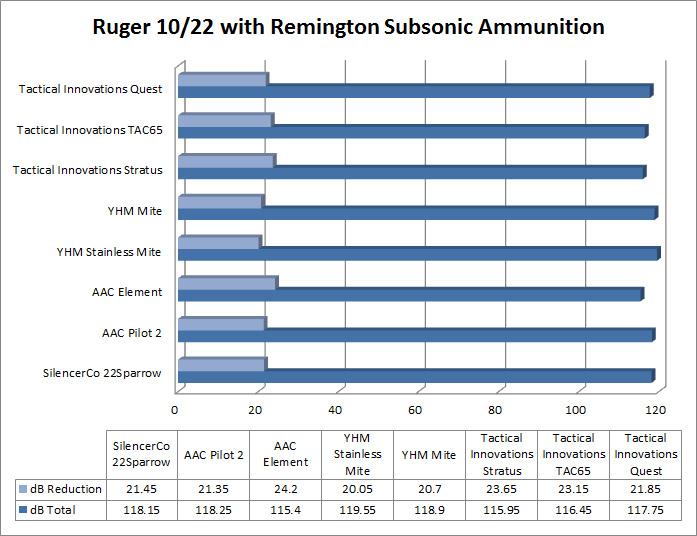 As you can see, there is some difference between the high-end cans and the lower end ones - but they are all in the 'safe' hearing range.  I should point out that the unsuppressed 10/22 rifle started out at 141.3 dB with Federal ammunition and 139.6 dB with the Remington Subsonic. The story is different with the Walther P22.  The pistol started out much louder at 155.7 dB with Federal ammunition and 154.45 dB with Remington Subsonic.  With the higher starting volume, the suppressors were really able to show their stuff. 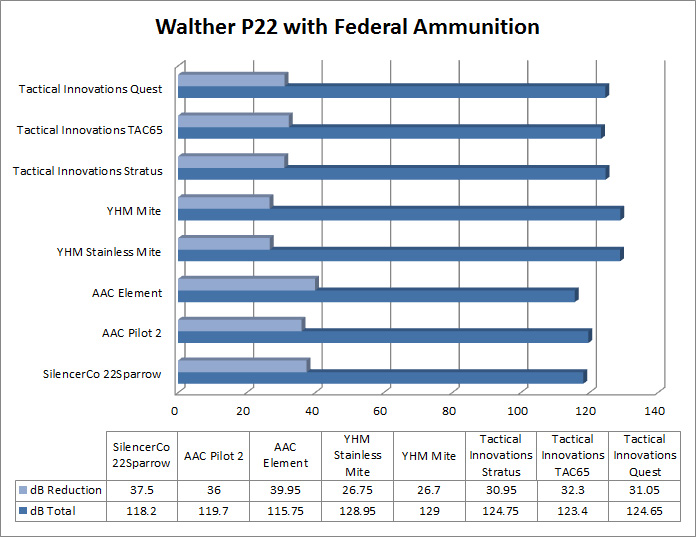 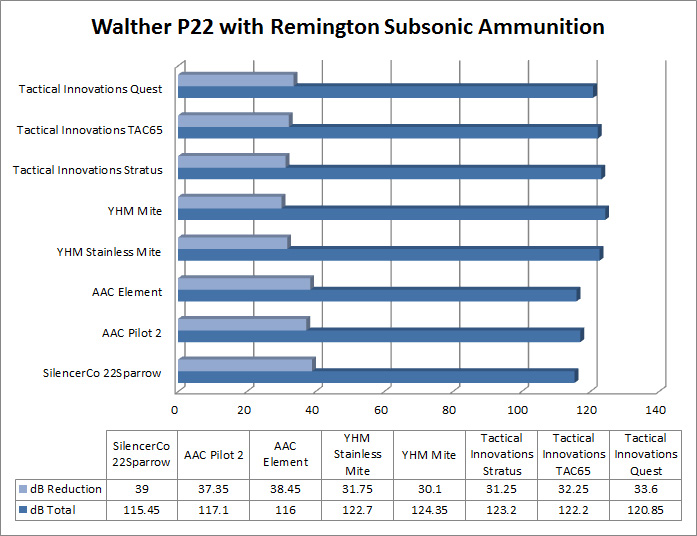 Overall, I think there are some clear winners... and losers. For people who want the very best, I think the AAC Element or the SilencerCo 22Sparrow are the obvious choices.  Although the Element is a quieter suppressor overall, the Sparrow makes up for it with ease of disassembly and maintenance. I suspect the best cost/performance choices would be either the AAC Pilot 2 - or the SilencerCo 22Sparrow once again.  These are both very good performing cans at a reasonable price. If low cost is the name of the game, then the Tactical Innovations Stratus or Quest suppressors should be at the top of your list. The only suppressors that didn't perform acceptably were the YHM Mites.  In both versions (stainless and aluminum), the results consistently came close to crossing over the safe-hearing threshold with the Walther P22 and Federal ammunition. Unfortunately, we didn't get the AAC Prodigy test results recorded correctly - so they were omitted from this review.  The next shoot-out will include the Prodigy as well as some SWR and, potentially, GemTech suppressors. We'll post some videos from this shoot-out over the next few days!
4 Comment(s)
Rozakneepsy
Great post!
Reply Aug 05, 2019 15:37
Courtney Goff
Is there any interest in testing the Rebel SOS .22? I'd love to see how that design and pricepoint stacks up.
Reply Dec 28, 2016 08:00
Jeremy Mallette
No we wonâ€™t be carrying it. Sorry about that.

Reply Mar 15, 2016 08:00
Mark Porter
Do you have updated tests that includes newer suppressors?
Reply Feb 16, 2016 08:00
Jeremy Mallette
You can go to our YouTube channel and see all the recent tests. There is a rimfire playlist that shows all of them.