While cycling issues on your favorite firearm can be a royal pain in the posterior, they are not quite as common as some of the internet may lead you to believe.  They certainly are a factor, but gaining a very simple understanding of how silencers affect the action of your particular firearm can dramatically reduce the number of issues that some people seem to complain so loudly about. 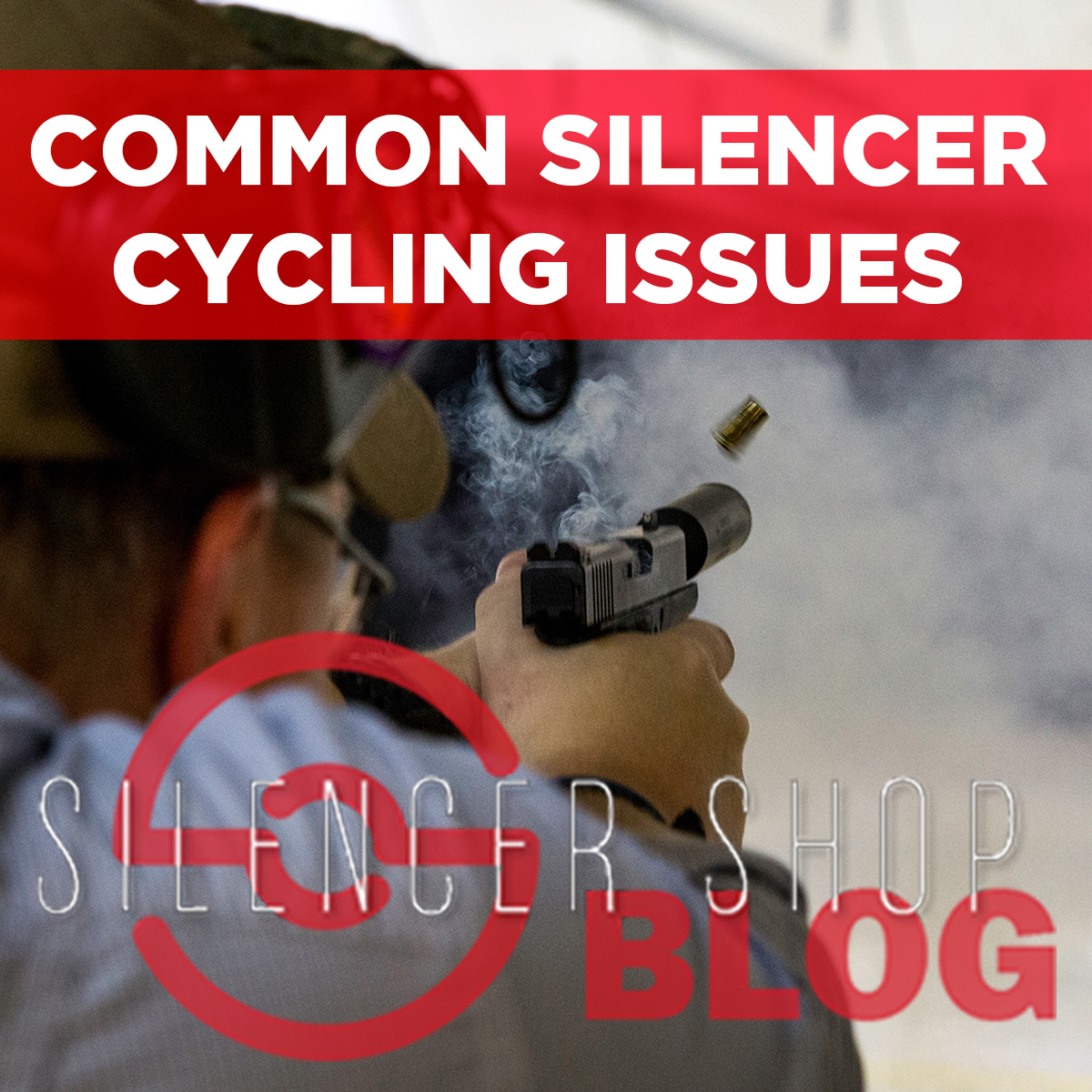 Over-pressuring and under-pressuring a system specifically applies to both rimfire and centerfire rifles. When firing a round on a firearm, pressure goes straight out of the muzzle and into the atmosphere. But, when you put a silencer onto the host firearm, you are adding baffles between the explosion and the atmosphere.

Without getting all high school physics on you (but still getting a little physics-y on you), pressure follows the path of least resistance.  Therefore, by adding some resistance to the muzzle end of the firearm, some of the gas that normally would have been expelled at the muzzle will instead introduce more pressure back into the firearm. There are a few ways to adjust that pressure so that you’re getting the most out of your firearm.

An important note: rimfire rifles run on a different system with almost all blow back. We’ve found that the more pressure there is, the more likelihood there is of it being reliable, especially because they generally have such low pressure to begin with.

Most of the time, more pressure will increase reliability, especially with firearms that are picky about ammo.  As mentioned above, we most often see this in .22lr hosts. Guns that are picky on ammo are usually picky because there isn’t enough pressure to cycle the firearm. It is a lot less likely to have cycling issues due to too much pressure.

It is fair to mention that too much pressure can increase the speed of the bolt/slide so much that it fails to feed another round. In most instances that we have seen of this, it is an issue with the firearm itself and completely unrelated to any effect caused by the silencer.

On an AR based platform, adjusting the cycling speed of the bolt is easily corrected by altering the buffer weight. Buffer weights are used to speed up or slow down the cycle of the firearm, which in turn helps compensate for the pressure added or taken away.

The more pressure you introduce back into the system, the heavier buffer you will most likely need to counteract it. If you are speeding up the cycle rate of your gun, then you will more likely than not need more weight in the back to offset that effect.

For the more technical minds in the audience, force divided by mass gives you acceleration, so if you increase the mass of the buffer – and by extension the bolt – you can slow down the cycle. Generally, your standard AR platform rifle will come with H1 or H2 buffer weights, but depending on the weight you need, they go up to H9.

Pro Tip: the easiest “field expedient” way of adjusting a gas block is by observing where the firearm is throwing the spent brass.  Shoot 5-10 unsuppressed rounds and see where the spent brass is. It should typically be making a “grouping” at a 3-4 o’clock position.  If adding a suppressor moves that group up to a 1-2 o’clock position, you’re getting too much gas and the casings are coming out so fast they are hitting your deflector and bouncing forward. Constrict the gas block to allow less gas into the action and you should be spitting spent rounds back at the 3-4 o’clock position again.

Every effect we covered thus far is gas/pressure related; the one exception to these rules is an intricacy inherent to booster assemblies: Friction. We touched on pistons very briefly in another blog post [https://www.silencershop.com/blog/post/thegood-thebad-andtheugly/] but, even though they aren’t extremely common, these are issues that could happen to anyone, and they’re fairly easy to mitigate.

Does it move? Needs some lube. Get your mind out of the gutter, we’re talking about pistons, here. For pistols, in almost every occasion, the biggest culprit of cycling issues is friction. Remember, a piston is a moving part. So, in order for it to actually do its job and function properly, it needs to be unobstructed and lubricated. A piston can very easily seize up due to carbon and lead build up or being too dry to move. Luckily, keeping it clean and lubed is a simple practice so there isn’t much to worry about there. Firearm hygiene is just as important as personal hygiene!

Side Note: The Odessa 9 has a unique feature that is worth mentioning. Dead Air includes shims that can be placed between your piston and booster spring that allows the ability to adjust the tension of the piston spring based on the cycle speed of the pistol. The Odessa 9 can be tuned to your handgun based on the number of baffles (read: weight of the silencer) in conjunction with the weight of your slide and pressure of your ammo. A heavy slide shooting a light load or a light slide shooting a heavy load can produce different cycle speeds.  The Odessa 9 can be specifically adjusted to accommodate for those changes in speed by simply compressing the booster spring with one (or more) of the included shims.

We’ve covered a lot regarding the inner workings of your favorite pastime activity. Although these are seemingly small parts of a bigger picture, these elements comprise the heart of your firearm. No cycle means no pew pew.

Let us know how you customized your favorite firearm and what you found to be the best way to mitigate cycling issues!