How Does a Flash Hider Work

How Does a Flash Hider Work

How Does a Flash Hider Work?

In addition to a suppressor, one of the most common improvements you may want to make for your firearm could be a flash hider. Flash on your firearm is caused by unspent powder, and combustion gases that exit the barrel of your gun. With inexpensive and easy-to-install upgrades, you can shoot more stealthy, immediately with a flash hider.

What is a Flash Hider?

Flash hiders are one of the most popular muzzle accessories for rifles: they’re inexpensive, easy to install, and available from popular manufacturers including SilencerCo, Dead Air, and Surefire. What does a flash hider do? Flash hiders eliminate the bright flash of light that occurs when the muzzle blasts while firing a rifle. Flash hiders were popularized when the A2 “Birdcage” AR15 flash hider was fielded in overseas combat. Flash hiders may also do double duty as suppressor mounts such as the SilencerCo ASR or Dead Air Keymo flash hider.

How Does a Flash Hider Work?

Flash hiders work by redirecting the gases exiting the barrel of your firearm. The most common types of flash hiders are 3-prong, 4-prong, or closed-tine designs. The mechanics of these flash hiders are identical: nearly all of them are engineered to disperse gas and unburnt propellant that is leaving the muzzle. By doing so, flash is vastly reduced because the prongs of the flash hider break up the muzzle blast.

If you hunt at night or participate in tactical drills after dark, minimizing flash can be instrumental to achieving your shooting goals. In real-world settings, do flash hiders actually work? Flash hiders work very well to reduce the blinding effect of muzzle blasts you may experience in dim or low-light environments. You’ll also be less likely to disrupt animals or other people because your flash hider has the added benefit of reducing flash signature. When you’re In darker scenarios such as hog hunting or nighttime drills, you’ll want to protect your vision and preserve natural “night vision.” A muzzle flash hider will disperse the unspent powder and gas exiting your barrel. This effect is significant for short-barreled rifles (SBR), where muzzle blast is even more pronounced.

If you’re improving your firearm you could be asking: is a flash hider or muzzle brake better? Flash hiders and muzzle brakes serve very different purposes: both are effective muzzle devices and suppressor mounts, but each affect your shooting in vastly different ways. If your goal is to reduce signature, a flash hider will be the better option, if you’d like to reduce recoil, a muzzle brake will be best for you.

Outfit Your Firearm with a Flash Hider Today 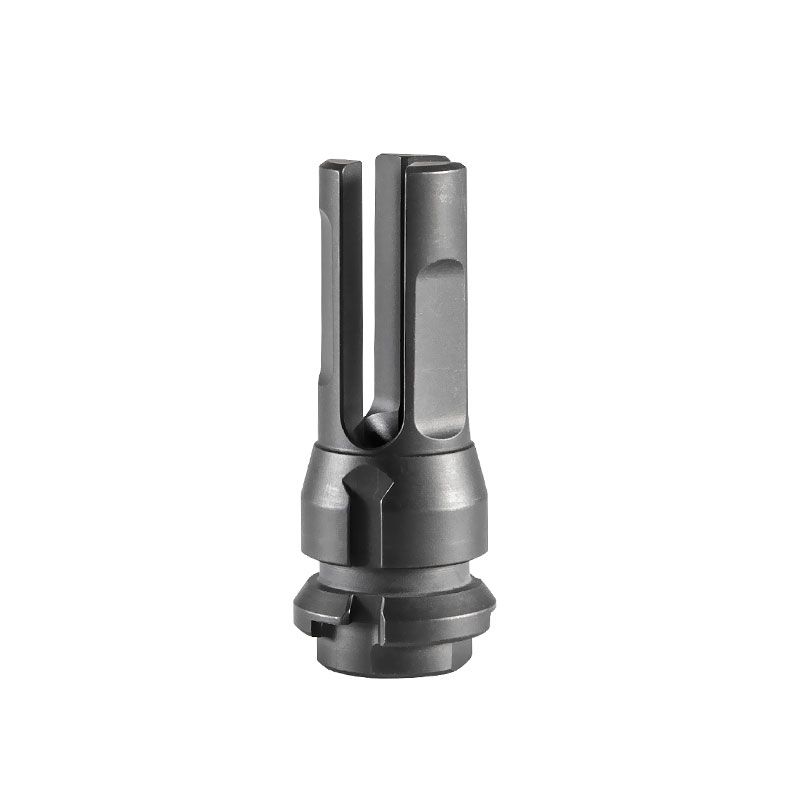 Flash hiders are available across a range of calibers from .223, to .308, and even 9mm caliber options.

Some of the best-reviewed and most popular flash hiders online are:

If you’re shooting suppressed with certain suppressors such as a JK Armament 155 SBRX  or Dead Air Nomad, adding flash-hiding end caps is an improvement you may want to consider. These simple attachments are placed at the end of your suppressor to further reduce flash by redirecting the gas when it leaves your suppressor’s bore. You’ll achieve ultimate flash suppression, outfitting your can with a flash-hiding end cap will provide you with amazing low-light performance.

Flash suppressors have many benefits you’ll experience with your host weapon. Flash hiders have exceptional low-light performance, reduce muzzle blast blindness and flash signature, and serve as awesome suppressor mounts due to their concentric design. The installation of a flash hider is easy, as they do not require timing. Flash hiders are available in many different thread pitches and bore sizes, so they’re easy to get for almost any of your firearms.

Flash hiders have many benefits, but there are particularities to be mindful of. Older, symmetrical open-tine flash hiders can create a ringing sound, similar to a tuning fork. This has been remedied by most modern designs, which are engineered with improved architecture and closed-tine models. Flash hiders work well for signature reduction, but thinking about flash hiders vs muzzle brakes: the purposes are different. Muzzle brakes and compensators are superior if you’re trying to reduce recoil, thus building a “softer” shooting rifle.

A flash hider would be a great muzzle device for your next carbine build, or to add to a rifle already in your collection. If you need low-light performance for predator hunting or shooting under night vision, a flash hider will significantly improve your rifle's muzzle flash signature.