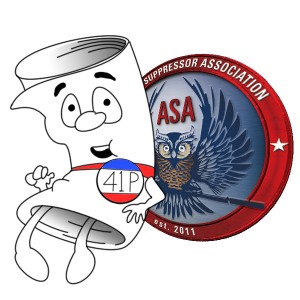 When the ATF initially proposed their 41P rule change in 2013, we took it very seriously and worked hard to help NFA users submit as many comments as possible.  We also invested significant resources in writing a comment of our own. Since that time, we've been working closely with the American Suppressor Association to ensure 41P doesn't go into effect; and, that it will have a minimal impact on this industry if it does.

If 41P goes into effect as originally written (which is unlikely), it would require all members of a trust or corporation to get a CLEO signature and fingerprint cards with each NFA purchase. It's easy to see how this would place a significant burden on new suppressor owners - and why the industry & gun owners are against it.  (You can read more details about 41P on this page.) Keep in mind that it's unlikely that 41P will go into effect as originally written.  There are lots of things that could be changed & watered down - and the ATF has said it could take months to implement if they decide to move forward. They've also said that existing NFA applications would not be impacted by 41P going into effect.

What is the American Suppressor Association doing about it?

The ASA has been on the front lines of the fight against 41P - as well as helping expand our rights in many other ways. There are currently several strategies, and we can't go into all of the details here; but, here are the main points: In addition, the ASA is working to remove suppressors from the NFA altogether with the Hearing Protection Act - although we don't expect that to pass anytime soon.

Is it panic time?

After working closely with federal & state lawmakers and regulatory agencies (including the ATF & NFA Branch) - it's obvious that nobody wants 41P to be implemented (other than the current administration). If it did go into effect, it would create problems at every level - for both government & industry. We don't have a crystal ball any more than anybody else, but everything we hear from the ATF, NFA Branch, and lawmakers indicates that it will continue to be put on hold indefinitely.

As with any other lobbying organization, the ASA needs members & money to be successful. It doesn't take much to join the ASA - and a donation is simple with your order at Silencer Shop by simply adding a buck for the ASA during the checkout process.  Thanks to your generous donations, we've been able to collect and donate over $65,000 in 2015 alone - which is a huge part of the reason the ASA has been so effective at fighting 41P! If you haven't already joined the American Suppressor Association, please take a few minutes to support this cause and join today.
0 Comment(s)
My Wish List
Last Added Items
Go to Wish List
You have no items in your wish list.
Categories
Recent Posts