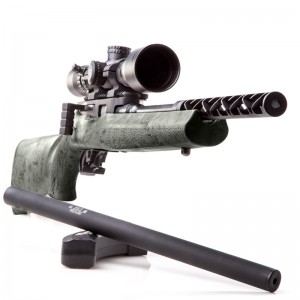 Over the last couple of months I've started to wonder what standard firearms would look like if they were regulated by the National Firearms Act (NFA). For example, look at the existing pistols from Glock, Smith & Wesson, or Springfield Armory and you'll see dedicated models for just about every purpose: Do you want a small/single-stack version for concealed carry?  No problem. Are you looking for a long slide version for competition use?  They've got you covered. Need a convenient holster-able side arm, a home defense pistol, or something with a threaded barrel for your suppressor?  Check, check, and check. I even own different color combinations of my favorite pistols that I've collected over the years. The same is true of rifles of just about every type - just look at the Remington 700 and you'll see more than 100 different combinations of styles and calibers.

Because suppressors are regulated under the NFA, customers tend to want a one-model-does-it-all solution - especially on their first purchase.  As a result, suppressor companies often focus on models that are a 'Jack of all trades, master of none'. Personally I think this do-it-all trend can be a good thing - up to a point.  In reality, it's the free market reacting to government intervention. The problem is when a first-time buyer gets their .50 caliber suppressor home and shoots it on an AR15.  The results are invariably disappointing because the bore size is just too big to be effective - and they don't realize the full benefit of shooting suppressed. Because suppressors are so awesome, I suspect the market would be significantly different if it weren't for the NFA. Here is a short list of things I think would change: Even with the NFA, the suppressors designed and built in the United States are the best in the world.  The reason for this stems directly from the fact that our gun market is so healthy - which helps offset the burdon of being regulated under the NFA.

Imagine the Firearm Market if it were under the NFA 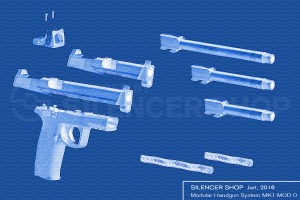 Just take a few seconds to imagine what the firearm market would look like if it were regulated the same way as the silencer market.  Imagine how you, as a customer, would react if you had to wait 6+ months to get a new pistol. In that imaginary world, I suspect there wouldn't be dozens of models of M&P pistols dedicated to different purposes.  Instead, you'd see a surge in popularity of interchangeable barrels & slides - and you wouldn't be able to buy additional parts without sending them back to the manufacturer for replacement. Firearms, in general, wouldn't be tuned to specific purposes; and we'd see more models that did an OK job of everything instead of an excellent job at just one task. We'd be interested to know how you think firearms would look if they required a $200 tax stamp and a multi-month waiting period.  Please chime in with your comments below.

As the silencer market grows, it will continue to attract more and more attention from federal regulators - which we've already started to see with the newly enacted ATF 41F rule change.  This is why supporting the American Suppressor Association is so important. Just remember to balance versatility vs efficiency when you start looking to purchase a suppressor - it's easy to go too far down the one-silencer-does-it-all path, and you'll often find the results to be pretty disappointing.
0 Comment(s)
My Wish List
Last Added Items
Go to Wish List
You have no items in your wish list.
Categories
Recent Posts