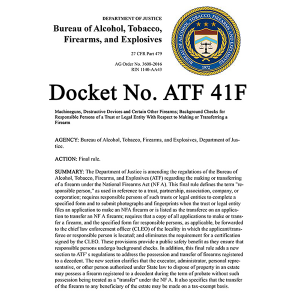 I'll be the first to admit that we didn't think 41P would happen at all; but, as everyone now knows, it was approved (with some modifications) as ATF 41F earlier this week.

Here are the key takeaways:

How is this ruling going to impact the NFA industry?

If you want to read the entire document, feel free to peruse the 248 page monstrosity here. My personal favorite comment comes from page 26 where it says 'More than a dozen commenters stated that they supported the proposed rule in its entirety' - does that mean 13 out of 9,500?  Personally, I think they should have just said a full baker's dozen supported the rule. If you ever had doubts about the importance of the American Suppressor Association, now is the time to put those doubts to rest and show your support.  If it weren't for their efforts, 41F could have been a lot worse. Stay tuned and we'll keep you updated as we get new information on how ATF 41F will be implemented.  We can't wait to see how the new forms are going to look!
0 Comment(s)
My Wish List
Last Added Items
Go to Wish List
You have no items in your wish list.
Categories
Recent Posts