The American Suppressor Association (ASA) is the unified voice of the suppressor community. They are the world’s leading subject matter experts on suppressors and suppressor related advocacy. They exist for one reason and one reason only: to fight for pro-suppressor reform nationwide. They are the boots on the ground in the fight to legalize and deregulate suppressors, and are the front line of defense against the anti-suppressor factions that want them banned.

No other entity will dedicate more time and resources to fend off the attacks than ASA. That is why Silencer Shop is proud to be a member of the American Suppressor Association!

At the federal level, ASA’s primary goal is simple: decrease wait times. Waiting for an indeterminate amount of months to receive a suppressor that you've legally bought and paid a tax for is frustrating. To address this problem, ASA is working to ensure that the ATF process NFA applications in a predetermined time period. No more variability and no more excessive waits!

In 2019, Virginia became the first state in decades to aggressively call for a ban on suppressors. Led by Governor Northam, the legislature tried to ban and confiscate the tens of thousands of lawfully obtained suppressors in circulation in the state.

The American Suppressor Association spearheaded the defense of suppressor rights at every step of the way. ASA spent weeks on the ground in Richmond, educated the majority of legislators about suppressors, testified multiple times in front of the legislature and the Virginia State Crime Commission, organized suppressor demonstrations for the media, and participated in rallies at the Capitol.

Through ASA’s efforts, anti-suppressor legislators removed the provision calling for the outright confiscation of suppressors. Unsatisfied, ASA continued to fight until the bill was defeated in the Senate.

The fight in Virginia is far from over. The American Suppressor Association anticipates that Virginia and other states will attempt to ban suppressors in 2021. In response, holding the line at the state level is ASA’s top priority.

Legalize Suppressor Ownership in all 50 States

Suppressor ownership is now legal in 42 states. Since forming in 2011, ASA led the charge to successfully legalize suppressors in 3 states: Iowa, Minnesota, and Vermont. As part of ASA’s No State Left Behind campaign, they will continue to pursue legislation in the 8 remaining states until suppressors are legal to own nationwide!

Legalize Suppressor Hunting in all 50 States

As a direct result of ASA’s work, 18 states have legalized the use of suppressors while hunting: Alabama, Arizona, Florida, Georgia, Indiana, Iowa, Kansas, Louisiana, Maine, Michigan, Minnesota, Montana, New Hampshire, North Carolina, Ohio, Oklahoma, Texas, and Wyoming. There are still 10 states in which the use of a suppressor while hunting is prohibited. ASA has worked on legislation in every one of these states, and will continue to do so until suppressor hunting is legal in all 50 states! 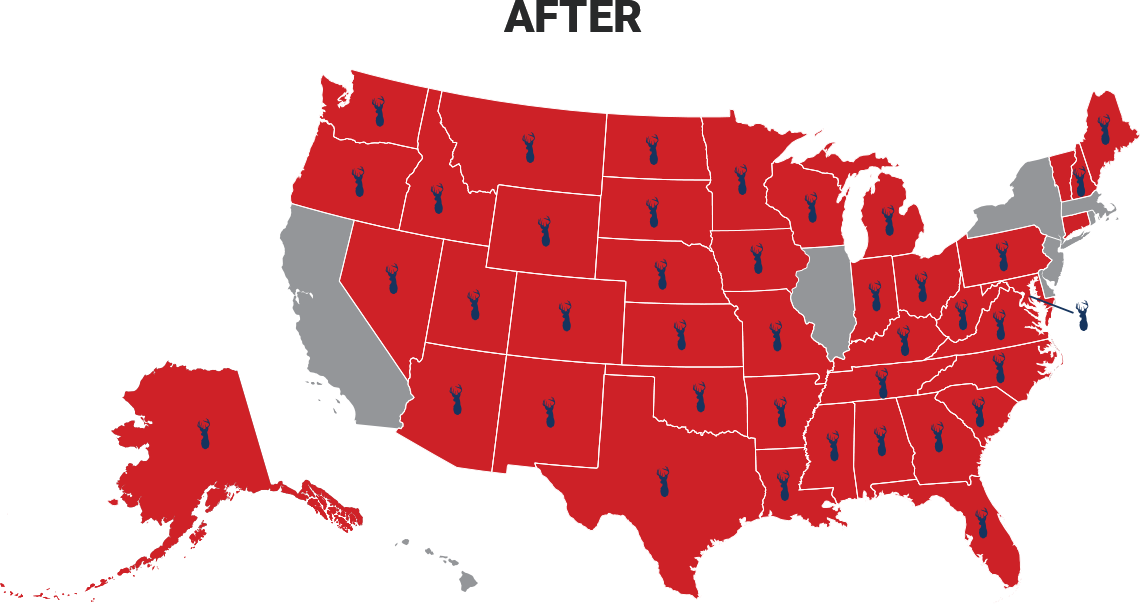 Fix Problems Within the NFA

The NFA Branch has a constant backlog of Form 4 applications. Silencer Shop has met with the ATF to help improve the process and implement new programs. The end goal of the ASA and Silencer Shop is to see instantaneous approval at the point of purchase.

The ASA is a sponsorship and membership driven organization. Whether you are a manufacturer, distributor, dealer, or suppressor owner, their strength comes from their members. Even if you don't currently own a suppressor yourself, if you want the right to own one in the future and care about the rights of others to be able to use them please consider becoming a member. Learn more about becoming an ASA member and start supporting the cause today.