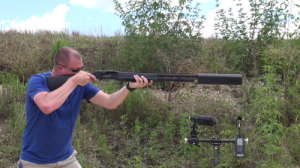 We spent some more time at the range with the SilencerCo Salvo 12 this week; and, once again the results were impressive.

One of the great things about the Salvo is its modular design that allows it to be configured as either a 12″, 10″, 8″, or 6″ suppressor, depending on the shooter’s needs on any given day.  For these tests, we focused on the 6″ module to see what we could expect from the smaller configuration – but we’re starting to think that 8″ may be the sweet spot for many users.

We were using a semi-auto Mossberg shotgun with both #6 (White Wing) and #8 (Light Target) shells.  For the Light target shells, we measured from both the muzzle and the ear – but we only got muzzle numbers with the heavier #6 shells.

On top of the suppression results, we’ve been doing quite a bit of other testing as well.

We’ve always measured from both the ear and the muzzle, and the difference is generally significant for a bolt-action/manually cycled rifle. With semi-auto rifles, on the other hand, the number at the ear tends to be pretty close to the muzzle number because of sound coming back through the ejection port.

Having said that, even though we’ve been testing with semi-auto shotguns, the results at the ear are significantly quieter. I suspect that’s because shotguns cycle so much slower – which eliminates a lot of the ‘ejection port’ blast. That’s a great thing for people who get the SilencerCo Salvo!

We’ve also noticed that the Benelli M4 sounded a bit louder than the Mossberg 930 – but these test results are all from the Mossberg, which is probably cycling slower. (If you want to see results from our testing of the Salvo on a Benelli, check out our previously posted videos.)

Now, on to the suppression numbers:

Results from the Muzzle

Results from the Ear

The light target loads (#8) are the loads that Skeet shooters are going to care about. If you want to watch our previous testing with #8 shot on a Benelli M4, be sure to check out this video:

This is the test dove hunters are going to care about. You can also check out the previous video tests we ran with a Benelli M4:

I’ll have to admit that it’s been kind of fun to get something so different from the norm.  We’re learning a lot about shotguns – as well as how to test and what tests make sense; and, as a result we should have a lot of great info available in the coming weeks.

The best thing SilencerCo did with the Salvo was to make it a modular design!  The 12″ configuration is definitely quiet – and gets down to very comfortable to shoot levels; but, it’s also a bit big to lug around all day.  That’s why I suspect most hunters will wind up settling on either the 6″ or 8″ configurations – so they’ll have a hearing-safe experience without the additional weight.

This is definitely the most exciting product to hit the market this year.