As the year draws to an end, we wanted to get a general feel for which suppressors dazzled us the most in 2016. To do so, we surveyed our knowledgeable Silencer Shop staff to gather which cans stood out over the past 12 months. By no means are our findings scientific (in fact, they are solely opinion-based), but they do shed some light into what our guys and gals prefer in terms of silencer performance, price, accuracy, physical attributes (e.g., weight, length), and so forth. 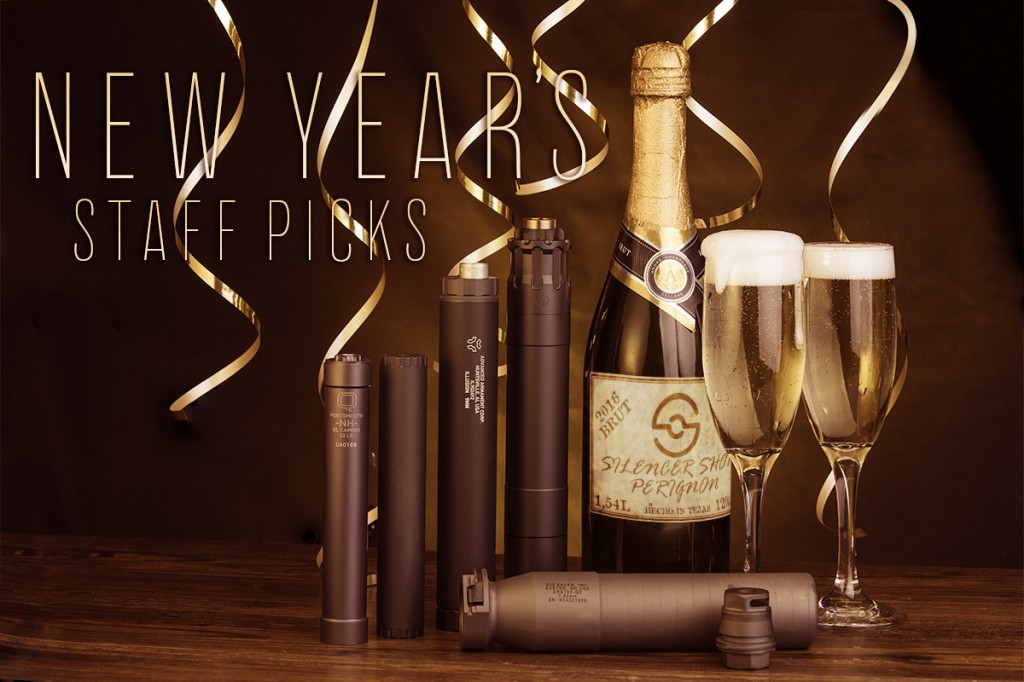 With so many impressive and effective options in each silencer category, it is nearly impossible to focus on just a few, but the results are in and have been verified. If on the fence about your next suppressor purchase, hopefully this is a useful tool.

The rimfire category brings us our one and only tie, so the survey kicks off with a (suppressed) bang! This classification undoubtedly has an amazing group of cans to choose from, but two grabbed co-top billing in our crew’s minds.

In the pistol category, a particular silencer garnered more attention than the other amazing units. Without further ado, the Silencer Shop Golden Can award goes to…

A true reflection of the overall greatness in both 5.56mm and 7.76mm rifle categories, many silencers were referenced by our team, but one was the overwhelming favorite across the board. And, the winner is…

All-in-all, the various suppressors available from our cutting-edge manufacturers are all winners. To look at the glass as half-full, that is one of the benefits of our highly-regulated industry; the lengthy process means that there is no room for “less than suitable” products.  The end user simply won’t stand for a subpar product if they had to wait months to pick it up! These survey results are an informal way to provide our faithful customers feedback – in the form of personal opinions of our staff – in hopes of making your silencer buying experience as enjoyable as possible. If we overlooked any cans that jump out to you, please feel free to submit recommendations in the below “Reply” section. We would really appreciate hearing opinions from each and every one of you as well.  Happy pew-pewing in 2017!

2 Comment(s)
Greg Merten
Great products but....please unsubscribe me from your emails. Thank You
Reply Jan 01, 2017 08:00
Jeremy Mallette
Sorry about that. You can unsubscribe at the bottom of our emails for future reference.
Reply Jan 02, 2017 08:00
Chris Sinclair
From the survey: How does the Rugged Surge and Razor stack up to the Sig and Griffin rifle suppressors. Are the Rugged suppressors more accurate then the Sig and Griffin? I have the two Rugged rifle suppressors in ATF purgatory with you guys now, but I want the truth not smoke. What is more accurate the Q or Tactical Solutions suppressors? Is either of those two suppressors more accurate then the SilencerCo Sparrow II SS? I did get a Sparrow from a local dealer as you did not have any. I ask as the Guns and Morron's Silencer special mag rated the Sparrow and Mask with high marks. (They also thought well of the Rugged Surge suppressor they tested.) I actually have a Mask and Sparrow I got before the mag came out. Wish you would have had those two at the time and I would have ordered them from you. Still don't think you have had the Mask in but I could be wrong. Is the Illusion 9 really that good or just a lot of AAC fan boys out there. I have two Rugged Obsidians on order with you. I thought about the Illusion 9, but just decided to go with two of the same. A lot of people on the internet seem unimpressed with the tone and maybe suppression of the Illusion 9, but what do they know. I have a Hunter Town Arms T22 Fusion I got of $299 that I have never shot. Do you have any thoughts on this integral? Is relations with SilencerCo improving? Thank you, Chris
Reply Dec 29, 2016 08:00
Jeremy Mallette
Just about all of the silencers that are name brand are just as accurate as each other. You will not see any issues with the Rugged, Sig, or Griffin since they all use taper mounts which are very accurate. On rimfire silencers since you are dealing with low velocity they are all accurate. The POI might be different for each one but it will be repeatable. The difference is when you clean it getting the baffles lines up with the threads the same the next time. This isnâ€™t an accuracy issue but can affect POI again. So are better about this than others. The Illusion compared to the Obsidian are apples and oranges. The Obsidian is a 45 silencer that is modular and performs well on all calibers. The Illusion is what I recommend to customers that are going to use it on a 9mm handgun 90% of time. It is my go to 9mm silencer. It is quiet and is the only silencer on the market that will work with factory Glock sights. I donâ€™t have any time behind the Hunter Town T22. Sorry I canâ€™t provide insight on that one. There has been no movement with SilencerCo.
Reply Jan 03, 2017 08:00
My Wish List
Last Added Items
Go to Wish List
You have no items in your wish list.
Categories
Recent Posts