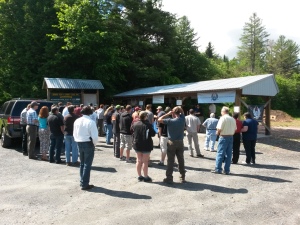 With silencers recently legalized in Vermont, Silencer Shop visited the Green Mountain State to support the American Suppressor Association at a silencer demo. The ASA scheduled a shoot for July 2nd -- the day silencers became legal to own -- in Barre, VT. The Barre Fish and Game Club hosted the event. Silencer Shop, Daniel Defense and SilencerCo were in attendance providing information and giving attendees the opportunity to shoot silencers ranging from .22 to 12 gauge. Attendees were eager to hear for themselves what a difference shooting with a silencer makes. The excitement was tangible since almost no one in attendance had shot with a silencer before. Knox Williams, President of the ASA, gave a safety brief and attendees lined up to test the silencers for themselves, with plenty of ammo provided to them. Everyone came away with a smile on their faces and a desire to exercise their newly acquired right to own a silencer. At noon, Knox introduced Rep. Patrick Brennan (R-Chittenden), who was instrumental in getting suppressor ownership language inserted into a hunting bill which would eventually pass by large majorities in both the Senate and House. Rep. Brennan recognized his colleague, Sen. John Rogers (D-Essex/Orleans), who along Rep. David Deen (D-Westminster) helped to get the provision into the bill. Rep. Brennan also thanked the ASA for working on this issue for the past several years and helping to keep making suppressor ownership a priority. Rep Brennan also stated that he will work next year on allowing silencers to be used for hunting in Vermont. Rep. Brennan received ASA's 2015 Legislative Award, Brent Miller from the Congressional Sportsmen’s Foundation was awarded ASA's 2015 Advocate Award, for their work in bringing suppressor ownership to Vermont. Silencer Shop is proud to have been a part of this historic event welcoming Vermont as the 41st state for silencer ownership. With the addition of Vermont, the American Suppressor Association is one state closer to realizing their goal for nationwide suppressor ownership. Please consider donating to the American Suppressor Association so that they can continue their goals in affecting real change in NFA laws.
0 Comment(s)
My Wish List
Last Added Items
Go to Wish List
You have no items in your wish list.
Categories
Recent Posts