Opinion , Silencer Reviews
One question we get all the time is whether it's possible to run smaller calibers through a suppressor. The short answer is 'Yes'; but, as with many things, there is a bit more to it than that. Before going into details, it's important to understand that caliber doesn't matter much with suppressors.  What matters is both bore size & pressure.  In other words, if the bullet will fit through the suppressor's bore, and the suppressor will handle the pressure of the round, then the suppressor will typically work with that caliber. That's why you can buy a 7.62mm (or .308) suppressor to use on a 5.56mm (or .223) weapon.  Another popular option is to use a .45 caliber pistol suppressor on a 9mm weapon. 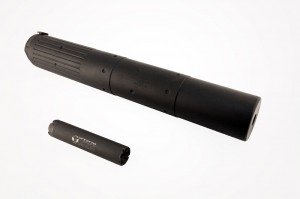 At this point you might be asking yourself why anyone makes smaller caliber suppressors at all?  Well, it turns out that suppressors are much more efficient when the bore size matches the bullet size as closely as possible.  Because of this, you can take a top-of-the-line suppressor for a larger caliber, and it will often perform like a bottom-of-the-line suppressor on the sub-caliber - even though the larger caliber can is both bigger and heavier. At the end of the day, we are basically trading the efficiency of the smaller caliber suppressor for the versatility of the larger caliber model. Although this isn't something that is set in stone, there are a couple of rules I try to follow when purchasing a larger caliber suppressor on a sub-caliber weapon: As I already mentioned, using a larger caliber suppressor on a smaller caliber weapon really is a case of trading efficiency for versatility.  Many people will find the allure of owning just one suppressor for multiple weapons to be well worth the trade-offs - while others will prefer to get the best fit for each weapon. Whatever you decide, just let us know if you have any questions and we're happy to help you pick the best model for your needs.
1 Comment(s)
arenoSerma
Hey, this is off topic, but where did you get the Html template for this web site? Thank you!
Reply Jun 18, 2019 22:39
Tyler Walters
Thanks, we actually built this bad boy from scratch!
Reply Jun 18, 2019 23:01
My Wish List
Last Added Items
Go to Wish List
You have no items in your wish list.
Categories
Recent Posts