Events , General
Over the last few days, we've been in Florida trying out some of SilencerCo's new and upcoming products at their Maxim Vice event.  As you can imagine, it was an absolute blast! 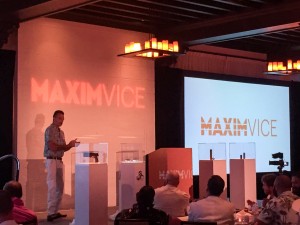 Although they introduced 4 new products, there are only 3 that will directly impact our customers - and we'll quickly go through those here so you know what's coming. We'll cover them in order of product availability, starting with the SilencerCo Osprey Micro which is available now.

The Osprey Micro will be the first product to hit store shelves - and it's a new twist on .22 suppressors.

Unlike most new SilencerCo products, the new Micro won't appeal to everybody - and I suspect both the Sparrow and Spectre II will continue to appeal to a broader user base.  Having said that, if you're looking for something different, the Micro looks like a great little can! After spending some time playing with the Osprey Micro, as well as shooting it, here are my initial impressions: Advantages Disadvantages Overall, I think the Osprey Micro will be a hit - although it will appeal to a more limited market segment than either the Sparrow or Spectre II.  At the end of the day, it's kind of a Silencer-Guy's silencer. :) Stay tuned for more in-depth information in the coming weeks!

The Silencerco Hybrid should be available around the beginning of 2016.

It's the most universal 'Do-Everything' suppressor I've ever seen, and I suspect it will be a huge seller.  In my opinion, the Hybrid will target 2 major customer groups: As far as performance goes, the Hybrid appears to do better on big-bore platforms.  We'll need to do more testing to figure out which calibers it is comfortable/hearing safe for - but I have very high hopes. Once again, we'll have more in-depth information as we get closer to the actual availability date in January.

The new all-in-one pistol from SilencerCo is both the farthest out (expected toward the end of 2016), as well as the most exciting (at least to me). The Maxim is an all-in-one pistol that can be holstered, is very quiet, and made me feel like RoboCop.  What's not to like? :) The model we shot was definitely a pre-production model, so I'd probably ignore most speculation you read on it - but it showed an enormous amount of promise.  I can't wait until we start getting closer to product availability next year!

It's amazing how SilencerCo continues to innovate with new & different products year after year! We'll post videos and other information on these products as quickly as possible, so keep an eye on our blog and Facebook forums!
0 Comment(s)
My Wish List
Last Added Items
Go to Wish List
You have no items in your wish list.
Categories
Recent Posts