Opinion , Shooting
Yesterday I had some friends come into town for an event and they thought it would be fun to head out to try some suppressed shooting.  I took a collection of weapons ranging from .22 and 9mm through .223 and .300 BLK. As an experiment, I took a variety of suppressors for each weapon just to get a feel for what they would prefer.  I didn't give them any details about any of the models and just let them shoot them all to see which would end up being the favorites. 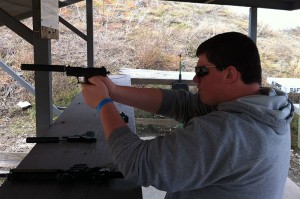 On a Walther P22, the general preference was the AAC Element 2.  This was mostly because of the performance - but the weight played a part as well. On a Savage Mark II rifle, the overwhelming consensus was the  Liberty Kodiak TL.  This was one of the two models that really made an impression overall - and I kept hearing comments about the sound of the firing pin hitting the round and the bullet impacting the paper. :) On a Smith & Wesson M&P9, everyone absolutely loved the Silencerco Osprey 9.  The positive response to the suppressor was overwhelming - just like the Kodiak TL.  At the end of the day, this was the model they were talking about buying for their own use! On a 12.5" AR-15, I only brought one suppressor since I didn't feel like changing out flash hiders.  That was the SWR Specwar; but, it probably doesn't count here since there wasn't anything else to compare it to. On a 12.5" .300 BLK, we were using direct-thread suppressors, and the Thunder Beast 30P-1 stole the show.  I do wish I had set it up for the 762-SDN-6; but, oh well... The most important thing was that everyone had lots of fun!  We shot all of these wet & dry, and I still don't have all the guns cleaned up; but, the in-laws will be in town this weekend, so I'll have lots of time alone out in the shop!  (Just kidding John. :) ) I'm always amazed at how much more fun it is to shoot with a group when the muffs come off!
0 Comment(s)
My Wish List
Last Added Items
Go to Wish List
You have no items in your wish list.
Categories
Recent Posts