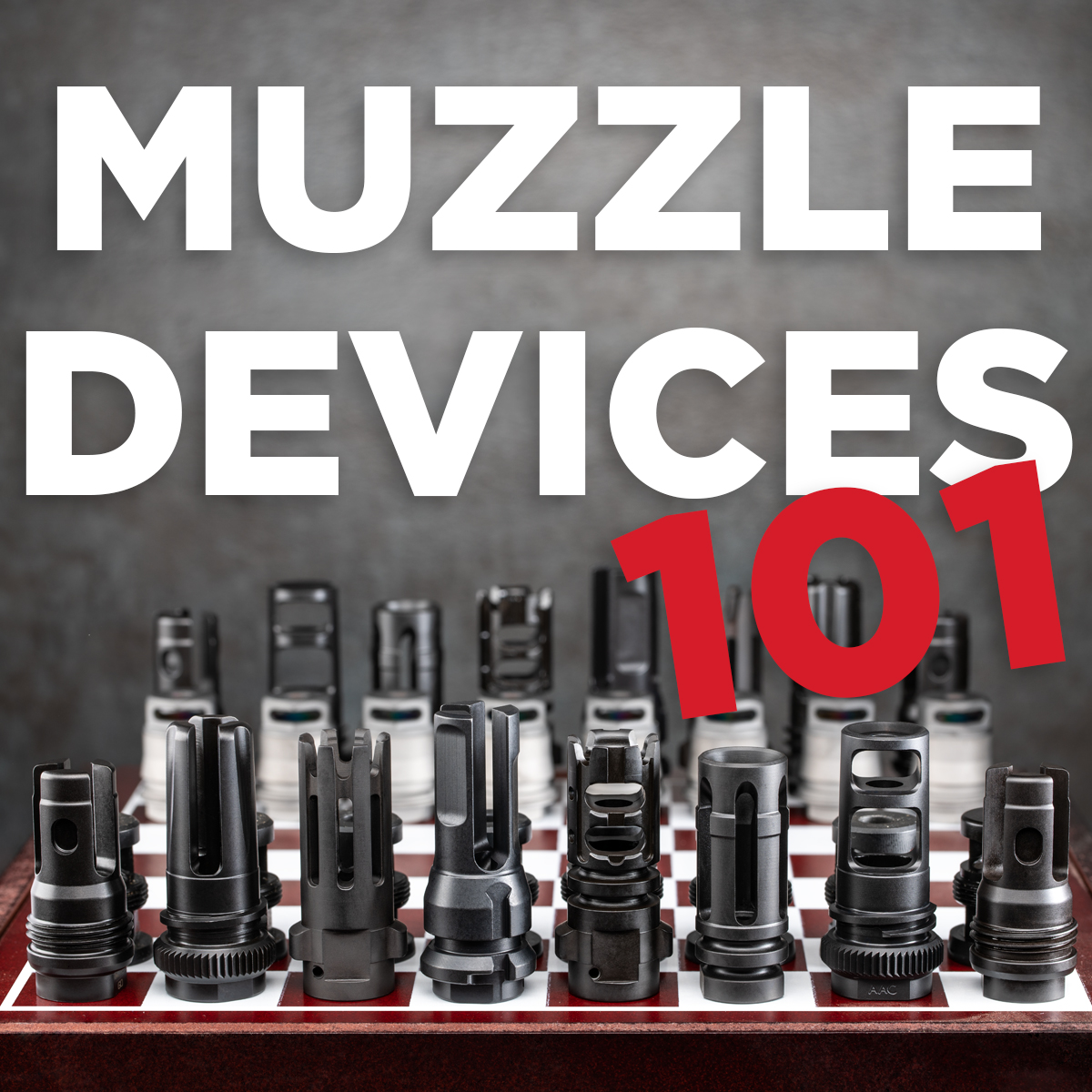 Although we’re in the business of hiding mounting devices on firearms, their importance is still significant, especially since they don’t get a ton of facetime as a topic of discussion. We’ll be shedding some light on muzzle brakes, flash hiders, compensators, and everything in between because what you mount onto your host firearm prior to mounting your silencer does play a role in the overall performance of the gun. Read below for an intro course to some terminology used and the main reasons why you might use one over the other.

Will Brake for Muzzles

Timing is to ensure that the ports are properly positioned on the firearm. Almost all muzzle brakes should be timed, although, with a silencer on the firearm, it isn’t AS important.

Sometimes, when you’re screwing the muzzle brake onto the host firearm, it won’t automatically be timed correctly. There is a tool called a shim (similar to the shape of a washer, except they are the exact same thickness all the way around) that usually come with muzzle brakes in varying thicknesses so that you can time the muzzle brake correctly.

It is worth noting that muzzle brakes are highly effective at reducing the recoil of their host firearm, but the downside is that all that directional gas will create an obnoxious amount of pressure and noise for anyone standing to the side of the firearm.  While this is really only relevant for unsuppressed fire, it’s worth noting that your range buddies won’t be super excited to go shoot with you if you're running an unsuppressed muzzle brake on your AR-15!

Flash hiders are another option to mount onto your firearm. Aesthetically, they look like evenly spaced prongs. As the name of this device indicates, the purpose is to reduce the muzzle flash when shooting. Especially important in no or low light shooting environments to protect the shooters night vision, flash hiders break up the escaping gas and unspent powder to reduce the combustion that happens after the projectile leaves the barrel.

Flash Hiders come in multiple shapes and sizes and are generally categorized by the number of prongs and whether they are “open” or “closed.”  Three prong flash hiders are the most common silencer hosts but you will see some four prong and “closed tine” designs as well.  The classic A2 Birdcage is a great example of a closed tine system that reduces the possibility of snagging it on bags, clothing, vegetation, etc.

Many manufacturers make a three-prong flash hider with prongs of different length.  Since we get asked about this quite a bit, the reasoning is simple enough to cover here. Open prongs of the same length have a tendency to create a “tuning fork effect” as the projectile leaves the barrel.  By using prongs of differing lengths, they reduce the resonating effect and remove that pesky PING that can be bothersome to some shooters.

Although they are less prolific as compared to muzzle brakes and flash hiders, we thought we should mention another alternative: compensators. The main purpose of this type of device is to hinder the vertical climb of a muzzle by porting gas in a contradictory direction.

Most often, compensators have holes or ports along the top of the device so escaping muzzle gas has a downward force on the end of the firearm – counteracting the natural “muzzle flip” of the gun.  Many compensators also include some manner of horizontal ports that reduce recoil, as a muzzle break would, in addition to their muzzle rise compensation.

There are two more terms that we feel are necessary to mention and define: thread count and thread pitch. The main thing you need to remember when referencing these two, although this day in age, they tend to be used interchangeably, is that thread count is the standard American way of referencing threading, and thread pitch is the metric terminology used. Thread count measures by diameter in inches and how many threads there are per inch, whereas thread pitch measures by diameter in millimeters and the distance of space between each thread.

So what’s the best device to use? It almost always depends on what you want and what your goals are.

Generally speaking, if you’re shooting suppressed, we usually see people use flash hiders for a variety of reasons, but most particularly noted for (1) not typically having to time it, and (2) suppressed shooting already helps reduce recoil.

Muzzle brakes inside of suppressors act as a sacrificial baffle - it is thought that the ports will absorb some of the initial blast. However, the amount of absorption is still up for debate, and there’s an argument to be made that it’s negligible. In the grand scheme of things, if you purchase a quality suppressor, having a muzzle brake potentially absorbing some of the initial blast errs more on the trivial side than beneficial.

So there you have it. A quick crash course on all things mounts and some terminology that usually gets coupled with it. We understand that this topic can be dense, so reach out to us if you have any questions!

5 Comment(s)
Jeff Caminada
You explained it all perfectly! It couldn’t be any easier to understand. Thank you
Reply Aug 18, 2019 23:09
Pedro DaSilva
Thank you for the article, very informative and I now know more about suppressors and what they are supposed to do. Thanks.
Reply Jun 19, 2019 16:47
GARY THOMPSON
I have a Sig QD 762 suppressor with a 3 prong flash hider style adapter that attaches to the barrel. Are the special Sig crush washers that install between the flash hider and QD adapter available?
Reply Sep 13, 2018 23:27
Tyler Walters
Huh... We actually don't sell those crush washers separately... but we should. You may reach out to sig and see if they can get you one. I'm going to ask out purchasing department if we can track some down to sell as well.
Reply Sep 14, 2018 01:59
Richard Schubert
Wish you guys would impress upon the Manufacturers that most of us donâ€™t want a brake. I bought three silencers in the past 5 months, two have â€œincluded muzzle brakesâ€ like that is something special. I now have to buy flashhiders and I have two paper weights. YHM and Silencerco...
Reply Sep 13, 2018 23:27
George Cheney
You're not alone. I guess the wait time let's me save up for them.
Reply Sep 17, 2018 07:00
Bob Gentner
Thank you for sending Muzzle Devices 101. It was informative and I enjoyed reading it.
Reply Sep 13, 2018 23:27
Tyler Walters
Thanks Bob!
Reply Sep 14, 2018 01:59
Load more comments
My Wish List
Last Added Items
Go to Wish List
You have no items in your wish list.
Categories
Recent Posts