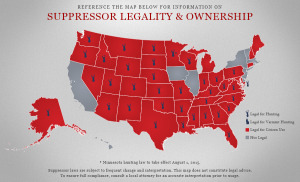 On June 12th, the Maine State Senate passed ASA backed Legislative Document 942, a bill which if signed by the Governor would make Maine the 37th state to legalize full game silencer hunting. LD 942 includes a “Shall Sign” provision, which would require Chief Law Enforcement Officers (CLEOs) in Maine to sign NFA applications within 15 days of receipt. The legislation is now on its way to the desk of Governor Paul LePage. Earlier this year, Minnesota and Montana passed and enacted similar pro-suppressor hunting reform. Maine will become the 13th state to enact some form of a “Shall Sign/Certify” process, joining 12 other states. The American Suppressor Association spoke directly with Gov. LePage about suppressor legislation and he assured them that he will sign LD 942 into law once the bill reaches his desk.
0 Comment(s)
My Wish List
Last Added Items
Go to Wish List
You have no items in your wish list.
Categories
Recent Posts