How-To
We get a lot of questions asking about direct-thread vs quck-attach suppressors. This is often one of the first things to decide when picking a new suppressor, and there are pros and cons to each attachment method. 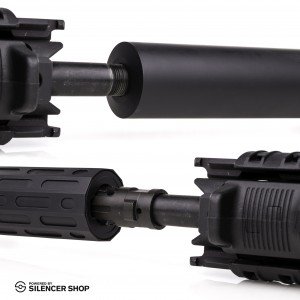 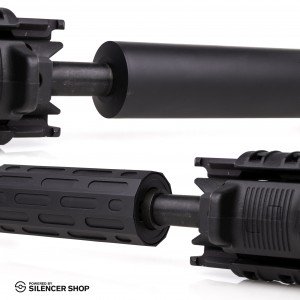 Let's quickly go into what the different mounting systems  are - as well as the advantages and disadvantages of each:

When most people think of a 'Quick Attach' suppressor, they're typically thinking of a locking quick attach.  In this case, you'll thread a flash hider or muzzle brake onto your barrel  (which still has to be threaded) and the suppressor will lock onto the mount instead of threading directly onto the barrel. One major advantage of a quick attach mount in general is that the mount itself acts as an adapter.  As a result, you'll often find that people who are running a 7.62mm suppressor on their 5.56mm weapon are using a quick attach adapter since the threads of the two weapons are different. On top of that, a locking quick attach also prevents the suppressor from coming unscrewed when doing any type of high-volume shooting. As a result of those advantages, you'll find that most people tend to prefer locking quick attach suppressors on semi-automatic weapons - like the AR15. The main disadvantage of the earliest quick attach systems was a loss in accuracy - and it tends to be most noticeable with tooth-mount locking systems.  (Tooth mount systems rely on teeth around the mounting device to hold the suppressor in place.) More current suppressors, like the Sig SRD models or SureFire 300 SPS, can actually have better accuracy than their direct-thread cousins.

A non-locking quick attach uses a flash hider or muzzle brake on the weapon; but, there is no locking mechanism at all. Earlier generations of these mounts tended to be the worst of both worlds; but, modern taper mounts have changed that significantly. There are several reasons that taper mounts work so well: Some of the best taper mount systems include the Thunder Beast Compact Brake models.  Interestingly enough, the Sig SRD quick-attach systems are also built on a taper mount. As taper mounts improve, they're quickly taking the place of direct thread suppressors for precision shooters & hunters.