Other Reviews
Halli & I spent last weekend at a Combative Pistol class with Tom Givens from Range Master.  The training was excellent and Tom was hillarious - so I figured I'd write a quick review and cover some of the things we took away from it.

The first thing I learned was that XD magazines suck!  Because of the drought here in TX, the dirt on the training range was a very fine, sandy powder.  After only a few drills where we dropped magazines in the dirt, many students' guns started to fail because the magazines wouldn't feed anymore.  It turned out that every impacted pistol was some variant of an XD - and none of the XDs were spared. Personally, I had opted to take an XD to the class, and Halli had taken her M&P.  That was an unfortunate decision in my case since I spent most of the day fighting magazines that wouldn't feed. At the end of day one, we cleaned out our pistols and the M&P magazines were far dirtier than the XD magazines were (because of the periodic cleanings throughout the day) - but they were still functioning perfectly.  I almost grabbed an M&P for day 2, but decided to try out an XDm to see if it had the same problems - which it turns out it did. The funny thing is that both those pistols have seen literally thousands of rounds of use.  I've gone through training, IDPA & IPSC matches, and shot at the range without a single issue.  That just shows that unexpected situations can cause our firearms to malfunction in new ways.  Regardless, I'm getting some new Wolff magazine springs for those magazines... Halli's M&P, on the other hand, functioned flawlessly. 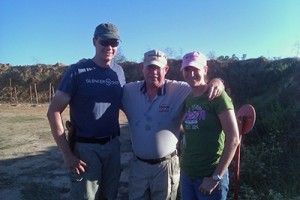 Tom was an excellent instructor with a very non-PC sense of humor.  You may not like him if you are language-sensitive, but it really was pretty funny. It seems like a lot of classes jump from topic to topic without really spending a lot of time on a single skill.  I often leave feeling like it was just a glorified practice session; but, this class wasn't like that at all, and it was very effective.  We spent two days slowly building on the same techniques which is a great way to really solidify knowledge. Some specifics that I learned (or re-learned): He also spent quite a bit of time talking about scenarios and mental preparedness.   Overall, if you're looking for a solid class to hone your pistol skills - I highly recommend Tom Givens!
0 Comment(s)
My Wish List
Last Added Items
Go to Wish List
You have no items in your wish list.
Categories
Recent Posts